PICO-8 initially caught my eye with a few beautiful pixelated games and graphics. Just look at the delightful screen capture of Celeste above.

Here's what I love about this platform:

- I love the aesthetic of these games: the low resolution, the 16-color palette. It's inspiring to see how expressive people have been despite (and thanks to) these limitations.

- Another limitation is code size. This usually means the games are bite-sized and can be played and beaten in a sitting.

- These limitations are chosen on purpose and are part of the magic. From the about page for PICO-8's website: "Lexaloffle is the home of computer games and fantasy consoles made by Joseph White, whose principle mission is to seek out and explore mathematically cute sets of rules that somehow give rise to thematically cute game worlds."

- My taste in games is trapped in the past, probably the SNES era. Even though SNES was slightly before my time, I've had a blast playing those games. In comparison, games that push the limits of today's hardware are impressive but they are too complex for me. What truly brings me joy are simple "retro"-style games.

- PICO-8 introduced me to the concept of a game "demake". When creating a demake, people boil a game down to its essence. They create a game with the same feel or personality as the original game but smaller and much simpler, usually with simpler graphics. My favorite right now is Picopolis, a demake of Sim City.

- PICO-8 games are distributed as PNG "virtual cartridges" with the code embedded in the cartridge image itself. The images look like the physical game cartridges of the 1980s and 90s. How delightful! You can see examples below.

- The creator of PICO-8, Joseph White aka "zep" (twitter), is a prolific software developer. He came up with the idea for PICO-8 and then built all of the development tools for editing code, music, sound effects, graphics, etc. In addition to creating PICO-8, he also built the BBS website where users post, comment on, and collaborate on games. The community is very creative and positive. He's made his own games such as Wobblepaint. He has other projects too, which you can learn about on lexaloffle.com.

Here are some of my favorite games so far: 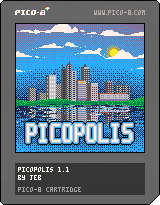 (backup)
Demake of Sim City. Usually Sim City has no win condition and I like how the author gave us some way to declare victory: by building a $10 million "Victory Monument". Playing this scratched the itch I had to play classic Sim City. Picopolis is made by Jens Bergensten (aka Jeb) who's best known for significant contributions to Minecraft. 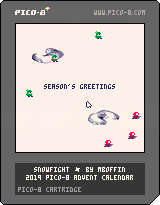 (backup)
This is a remake of an old Flash game winter holidays greeting card. Even the same winning strategy works as it did on the original game. Major nostalgic fun :)

(backup)
I love this! Great example of a demake. Sonic is only 2 pixels and yet anyone who's played a side-scrolling Sonic game will recognize the feel of the game, the music, and the iconic Green Hill Zone. 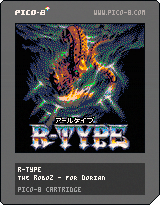 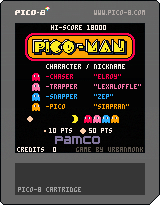 (backup)
A clone of Pac-Man. Thoroughly enjoyable just like the original. One user commented, "more proof that games just look cuter on the PICO :3". 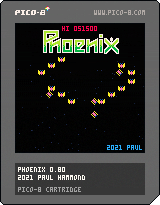 (backup)
My introduction to Phoenix-style games was in MirageOS on a TI calculator. It turns out Phoenix was originally an arcade game and this is a more faithful remake. 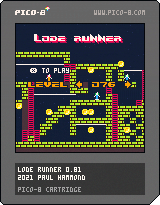 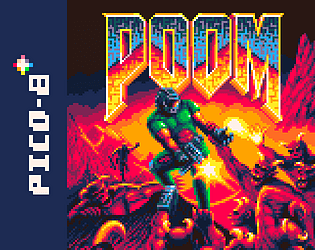 (backup)
A port of Doom. No platform is complete without one of these! This port really pushes the limits of PICO-8 and works around some of the limitations by splitting its code across several cartridges and then seamlessly jumping between them.

(backup)
This is a work-in-progress demake of Lumines. The mechanics aren't perfect and the iconic and addictive music and sound effects are missing but this still satisfied my craving for some Lumines action! That's particularly helpful because Lumines is one of those games that has been released several times as a new iOS app only to be abandoned and broken a few years later.

This demake isn't available to play (yet?) but it looks SO GOOD! 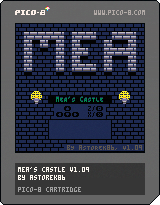 (backup)
Really fun Metroid-style game. I played through in one sitting and had a blast :) There were some jumps that were tricky (and frustrating) using the touch controls which might be easier with a keyboard. 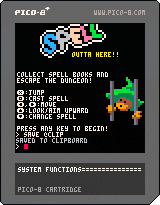 Get Me the Spell Outta Here!!

(backup)
Another fun Metroid-style game. You're a witch who uses a growing repertoire of spells to navigate a castle. 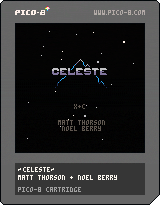 (backup)
Hardcore platformer that was made in four days as part of a game jam. Very impressive! It was ultimately fleshed out into a full commercially successful game. 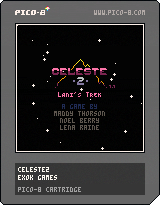 (backup)
A follow-up game with slightly different mechanics. Also tricky and fun like the original. 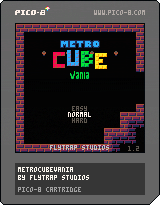 (backup)
Play as a bouncing cube gaining new abilities as the game progresses. 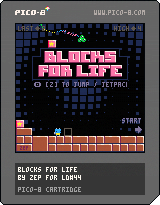 (backup)
Made by zep, the creator of PICO-8! 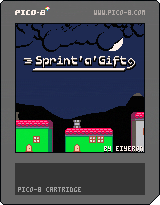 (backup)
Endless runner. Made for the 2020 PICO-8 Advent Calendar. 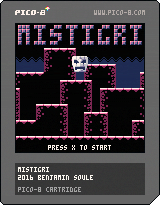 (backup)
Super polished graphics with many different enemies. Fun to play but hard to beat!

(backup)
Not technically a platformer but requires precise reaction time. Reminds me of Flappy Bird. The first game like this I ever played was SFCave in black and white on PalmOS (made in 1998!). 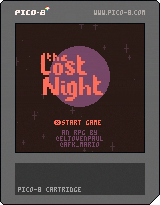 (backup)
Fairly complete RPG! I like the world and the quests. I don't like how many times I had to play the mini-game. I almost gave up when I was just about to beat the game because I found the mini-game so tedious. It reminded me of how many Zubat you have to fight in Pokémon caves. Grind through and you'll beat the game. 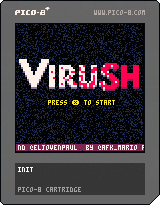 (backup)
With some tower-defense mechanics too. Fun! 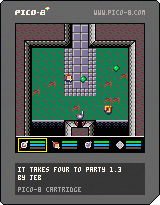 It Takes Four to Party

(backup)
Another game made by Jens Bergensten. This one has a similar feel to the dungeons in classic Zelda games with roguelike flavor. 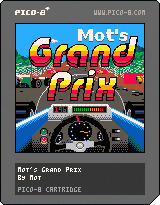 (backup)
Beautiful in low-res 3D. Amazing this is possible in PICO-8! 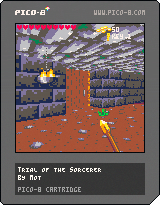 Trial of the Sorcerer

(backup)
3D dungeon crawler. Reminiscent of the old Windows 95 3D Maze screensaver (recreated by someone in JavaScript here (backup)). I remember watching this on the PCs in CompUSA.

(backup)
This is a charming drawing app. The wobble effect adds a lot of personality to the drawings. Another cartridge made by zep -- he has a knack for coming up with charming ideas! Some interesting discussion.

3D modeling! This cartridge is available on itch.io as "name your own price" so I didn't grab a backup. Really impressive work and I love the aesthetic. The Gastly above was posted by an artist here. 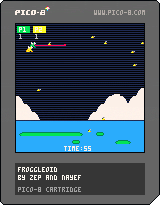 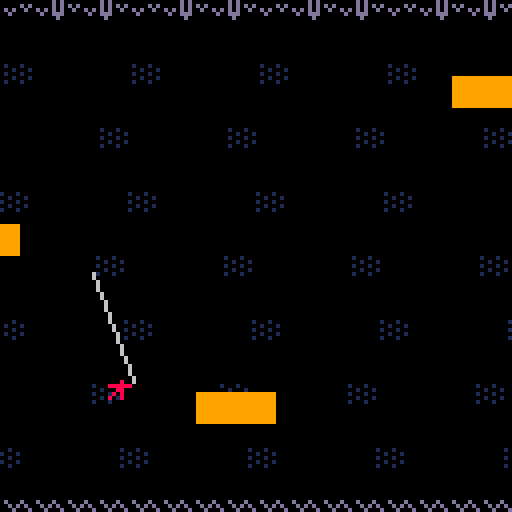 (backup)
A one-button Spider-Man-inspired game. I like the feel of the game! 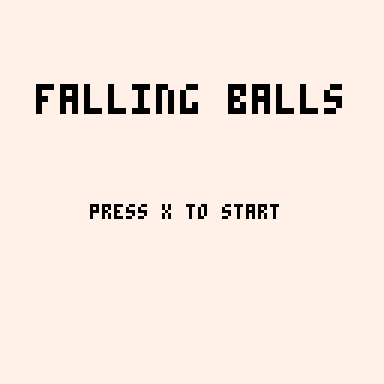 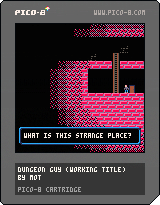 (backup)
A work-in-progress with a similar feel to Lode Runner. It's really cool that these levels are procedurally generated.